This is where Budapest's elite live. Dotted thickly with old villas and embassy residences, it got its name from the Turk Gul Baba, whose tomb is reached via a cobblestone lane. 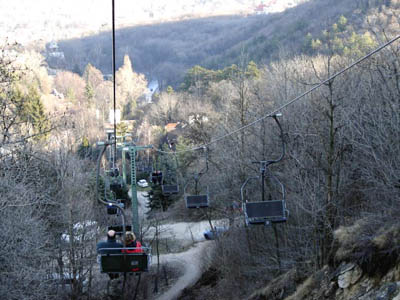 Janos Hegy is the city's highest hill. It is 527m high and offers wonderful views, especially from the tower at the top. This Neo-Romanesque lookout tower (a project by Schulek Frigyes) was finished in 1910. From the top of the hill, you can take the chairlift back down to the city. Getting to the hill is easy: if you've taken the children's railway, Janos Hegy is the fourth stop, followed by an easy ten to fifteen-minute walk. Alternatively, you could take the chairlift up. This is one of the most picturesque spots in Budapest.

The Chair Lift (Libego) is the one of the most interesting sights of the hills of Buda. During your trip you can take delight in the beautiful panorama. It takes you up to the top of the Janos Hill from Zugliget. The track is 1040 metres long and it goes very slow above the gardens of Zugliget around 10-15 minutes! Check the actual timetable! Opening Hours: 10-16 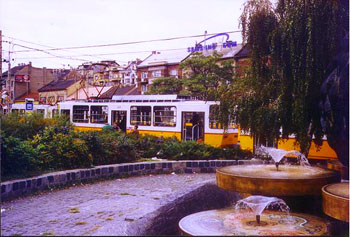 (The Square was first named Széll Kálmán Tér in 1929 and then in 1951 became Moszkva Tér. Prior to 1929 it was an unnamed piece of common land)

At the construction of the Budapest Tram system, Moszkva Tér (square) was just the foundation ditch of an abandoned Brick Factory, It was also used as a Tennis Court and Ice Rink. As the ditch ended in a gradient, the tram tracks were skewed around the site of the current tram junction, having a ?delta? and turning circle at the junction of Krisztina Körút and Szilágyi Erzsébet Fasor, much smaller than the present day version.

Moszkva Tér was handed over in 1942, on December the 26th, during the Second World War. At the beginning of the century, goods trains had used the so-called Jobbparti (Right-bank) circle line between Déli Palyaudvar (Southern Mainline station), passing near Pálffy (Bem) tér to Óbuda Station, connecting with both Tramway and HÉV services along the way, using steam haulage. In the 30?s it was taken out of use. but during the Second World War plans were made, that should the Northern Danube Train Bridge be lost, all vital supplies be sent via this route. During the same period, due to a rubber shortage, heavy restrictions were placed on all road traffic and the trams were heavily burdened with an upsurge in passengers. To simplify track alignments and help to maintain head ways, a large terminus was also built in North Buda, where trams could turn around a large turning circle; additional to this, trams passing through were guaranteed unblocked passage. With the threat of possible goods traffic, the line between Széna Tér and Krisztina Körút was adapted so as both forms of rail traffic could use it. It was at this time that the tunnel was created.

After the war, goods traffic did pass through here, for example, Coal from Dorogi was brought into the Capital, but the Kisrókusz utca GANZ factory also used these lines right up until recently. With some small changes, the square stayed the same up until 1990, by which time the turning and passing loops had fallen into disuse due to the double-ended nature of the Trams and the junction was rebuilt to a simplified format. 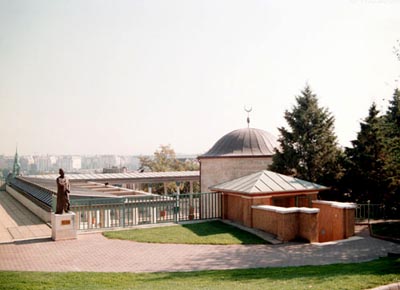 Baba was a Turkish warrior-saint who acted as the army's Imam during the conquest of Hungary in the 1541 campaign. Some of his poems - Guldeste = Bunch of Roses - and some of his mystical prose survive. The original mausoleum was built by the Ottoman commander Mehmed Pasha. Today, the renovated tomb, topped with a copper roof, is one of the few reminders of the 150 years of Turkish rule in Hungary. This was the true highwater mark for the Ottomans. At the peak of Turkish times, there were 61 mosques in Buda alone. Defeat in 1686 led to Habsburg renewal and a gradual, bloody rollback of the Turks. In its time, the tomb was a local center for Islamic activity. Today, it sits quietly on a back street of Buda high above Margaret Island, visited by the odd tourist or two.