District IX, Ferencvaros, is similar in character to the working-class if not downright impoverished eighth, except that it is now an 'up-and-coming' area. Trendy bars and cafés are springing up on Raday utca and in the section bounded by the Nagykorut. Gentrification will continue due to the potential for development alongside the Danube. 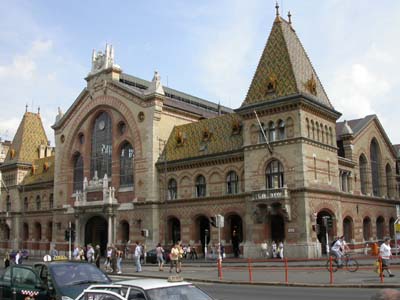 Heading south-west from Kálvin tér to Vámház körút, you'll come across the largest of five market halls opened towards the end of the 19th-century - the Central Market Hall. This grand structure originally incorporated an indoor canal by which goods were delivered to the market's traders. Restored in 1994, the sheer size and grandeur of the hall reflects an era when Budapest was a city with big ideas. Although the canal is long gone, visitors can still marvel at the amazing variety of fresh produce, meat and flowers for sale. Housed beneath a beautifully restored Zsolnay tiled roof, the immaculately laid out market stalls charge the senses with a combination of vivid colours and intoxicating smells. As is the case with many of Europe's great market halls, if you plan to visit, do so early in the morning. Saturday in particular, is the best time to see this impressive market in full swing.